I haven't changed my investment strategy since May, 2009. The economic has been undergoing slow but steady recovery, and so has stock market. All serve me well so far.

However, the stock market went up too fast and too much recently, and some of my portfolio almost doubled in the past year. I became uncomfortable and extremely nervous recently. When I woke up last Thursday, somehow, I decided to sell most of my positions for the first time in more than 4 years.

The market kept going up, and I find that the opportunity loss is as real and painful for me as any investment loss. I kept asking myself, have I changed my view on long term economic outlook? is my current investment strategy fundamentally flawed? If so, what're these flaws and what're the alternatives? I couldn't give myself satisfactory answers. Another voice kept telling me to revert to status quo unless I can have new evidences and/or point out the problems in my previous strategy. After an agonizing week,  I restored my positions. This incident cost me about $60~70K, an expensive tuition! What have I learned from the mistake?

The week before last, my anxiety reached record level just as stock market. Last Tuesday, I came across a Chinese news story : A fisherman went fishing as usual and had no idea that an upstream dam was scheduled to open its gate to relieve flood pressure. The man saw the river rose slowly but took no action. When he found that he had to escape at any costs, it's already too late. He was swept away and drown immediately. My first reaction is that people tend not to see gradual change and thumb-suck till it's too late. The story was fomenting vividly in my mind ever since. I couldn't stop asking myself whether I was doing the same thing. This eventually triggers the selling of my positions. I myself was surprised that a single picture could have such an impact on my decision making. 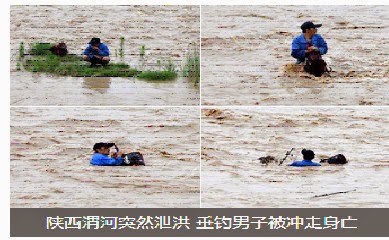 My theory is, the part of brain responsible for logic thinking and reasoning can often see the opposite arguments from both sides and result in analysis paralysis. It is good at deep analysis but slow at taking decisive actions and making the necessary calls during crisis. However, most of our everyday actions are actually executed sub-conscientiously by fight-or-flight mechanism and they are usually driven by emotion. This part of brain directly responds to the raw inputs and makes rule-of-thumb quick decisions. It's very quick and decisive but usually lack of deep analysis.

Evolution selects two seemingly conflicting mechanisms because we need both to survive. But, I think we need to primarily rely on the analytical part to guide our investment decisions because investment is inherently long term and non-linear and shouldn't be controlled by emotion.

To overcome the bias, I decide to slow down my decision making. Though I shall continuously take new data and facts into considerations, I shall not change my overall strategy lightly. The strategy change must be driven by business cycle and shift of large and long term trends. It shouldn't happen more often than once in a decade.

I shall not make portfolio changes more often than once in a year. When I do decide to trade, I must be able to elaborate pros and cons of the transaction. I shall write it down and tell my wife, and then put it aside for a few weeks before execution. A good investment decision shall not be easily swayed by my own mood, refuted by my wife, or affected by events in the next few weeks or months.
Posted by Clueless at 10:33 AM